This piece pretty well sums up why I feel a need to call to action in the wake of Trump’s election. If we accept what’s happened and meekly watch what happens next, we will be complicit in the inevitable disaster that overtakes the world.

We need to lift voices – both our own and those of others – that stand firm against ignorance and totalitarianism and call for solidarity and resistance.

The storm is coming in Europe, both in the guise of right-wing populists of various stripes but also in the guise of appeasers in positions of power who talk about “moderation” and “cooperation” as they bend their necks to the despotic forces on the rise. Both must be stopped.

The alternative is simply too dire.

Somehow a bigoted, racist, misogynist asshole has managed to position himself as the voice of the disenfranchised and rise to perhaps the most powerful position in the world. In Europe, his ideological bedmates are doing the same and will attempt to replicate his success.

We cannot allow this.

We must not allow this.

It cannot be that we allow these people to stand as the voice of those who are excluded and oppressed by global capital and their lapdog governments.

It cannot be racist libertarians are allowed to set the agenda for public discourse.

We need to take back the fight, to once again turn the struggle against capitalism into a struggle for humanity, for emancipation, for solidarity.

Followed by a cold determination and hard work.

Most of you have probably caught all or some of this http://www.guardian.co.uk/world/2013/jun/06/us-tech-giants-nsa-data

Everything we write on Facebook, search on Google, say on Skype, etc. can potentially be spied on by the US government. This is not a surprise, really. We’ve slowly been moving towards the panopticon society for a while now, but it’s a rude awakening having it thrown in your face like this.

I have to admit this conjures up conflicting feelings of fury and apathy in me. Fury since this is just an unacceptable way of constructing a society. We are all being criminalized and our freedoms are being stolen. Apathy since my life, like so many others, is wrapped up in digital connections and I don’t know how to disconnect without losing much that I value and am not willing to give up.

Gramsci was absolutely right. There is a ruling hegemony that finds cohesion in the need to keep the great mass of us docile and compliant and preoccupied with other things than tearing down the system.

I attended the 2012 Insight Out seminar at the film school in Potsdam, Germany from March 19 to 23 this year. I am dumping my “raw” notes here; they are unfiltered, unspellchecked and a little unstructured. They are useful to me – if nothing else, the act of taking notes helps me remember things – but probably not to anyone else…

NB: Peter works exactly the way we want to teach Digital Visual Design.
Melancholia had collaborators from Denmark, Sweden and Germany on the post production effects.
Peter worked as a “VFX Director” – closely with Director, DoP and PD throughout the production cycle
Partners in VFX included:
– Pixomondo in Germany
– Film Gate from Sweden
Peter and his VFX producer Karen were hired at the script stage
– made some models, working with the scientists who provided a large amount of the background reseach for the film.
– first VFX breakdown and budget already two months before preproduction started; worked closely with the films producer to find a solution that works with the total budget

Storyboard
– Peter worked with Lars, DP, PD and 1st AD
– final film very close to storyboard
Developed the colour and look of the Planet Melancholia; worked with Gaffer and DP so they could find a gel they used to give the effect of the light from Mel. shining through windows, etc.
Predefining what is needed; working with production to ensure what is needed is filmed.
Karen did cost estimates to see what is best done on set, what is best done in post.
The general trade-off is big, wide shots better as post VFX, while smaller, closer shots better as on-set SFX
Involved in planning 2nd unit shooting – ended up saving time and money
Made a production plan for FX shots

Financing
breakdown based on final script
gave all studios same breakdown, storyboards in order to get best possible bids.
shots were cut all the way until the end in order to make the budget work, or in some cases redistribute resources
Economy not the only factor in chosing post studios
– artistic style and visual understanding
– experience and capacity
– key competences
– personal contact
– location (travel time for Peter and Karen) –> this was a factor in chosing German Pixomondo over a Canadian competitor.
Tight schedule: shooting finished in September; film had to be ready for pre-Cannes screening in March
Budget har to consider shooting costs, personnel, construction, post hardware, travel, file transfers, etc. etc.
4-country co-production; there are national demands for where budget is spent – VFX also has to help by spending in those regions… (plus a large list of other investors)
— Worth noting that Film i Väst (Göteborg & Trollhättan) is a major booster of filming and post in that region —

The Shoot
Peter on set all days when vfx-shots planned
Input in how actors responded to the Melancholia planet in the sky
participated in shooting reference elements, plates, inserts, spinter unit with sfx and art dept. (most high speed); 2nd unit of varying sizes (inkl. model shoot), special elements (in this case, Northern Lights on Iceland), pickups (greenscreen)

Editing
Important to keep track of the shots used, that the vfx plan is still being followed; see if new shots come up, etc. –> important to follow up that the total VFX shots stays within the budget.
Peter takes job of VFX-editior: does rough versions of vfx shots once there is a “real” cut of the film available
Make vfx-demos for the post studios involved, allow them to start sketching their versions while waiting for the final version of the picture
Post studios provided temp versions for screenings

VFX
Online of film to vfx studios
briefings and presentation of shorts
VFX production schedule finalised
maintain communication and make visits, viewings — this is key to ensure what is delivered is what was wanted.
VFS shots to foley, sound editing, music
Coordination important, to ensure everyone knows who does what, when, and also movement of files, scheduling of approvals and viewings, etc.
Important also to coordinate with Producer to fit promo and trailer production into the schedule; they can really destroy a post schedule otherwise.
Peter works much like a director with the vfx-providers; is the creative leader of the team and needs to get the most out of the different artists.
– tools like Skype and Cinesync are useful, but there is no substitute for sitting and speaking in the same room.
worked with ftp –> still the easiest way to distribute files.

Grading
Peter supervises the delivery of every vfx-shot; also attends final grading
involved in creation of LUTs for dailies; ensure all vfx shots work with the LUTs
Grading requires delivery of alpha layers; mistakes in grading can ruin the effect of compositing!
Things like stars can cause major problems in downconversion for release formats — all these versions must also be checked.

This case shows how important it is for the FILM that the VFX director is involved from script to delivery.

Session 1: Visual effects photography and 3D with Mark Weingartner
Visual effects and CGI are not the same thing: not all vfx are CG, although they may have CG elements.
– many elements, plates, miniatures, etc. are shot, then manipulated, composited in post.
Useful book: VES Handbook of visual effects
Things like Vistavision still used for f/x
For 3d models – use lidar scans instead of photos for plates.

Session 2: “101 It’s Easy” –> new company helping production companies make transition to file-based
Protection of media is key
Digital allows sharing and collaboration to a much greater extent; this increases complication
Cloud-based file management is key to collaboration and sharing; producers need a system that can be secure but flexible.

Session 3: Dolby PRM-3200 reference monitor
John Bleau
New monitor a response to the lack of a proper display in post after CRT discontinued.
– main problem is there is no longer a universal reference standard
– LCD and plasma have severe colour and black/contrast limitations.
– OLED and plasma have a short life
– DLP best colour, but poor contrast, poor blacks
Dolby monitor 40000:1 contrast, 12-bit colour. Can handle raw output from Alexa, for example.
$40,000 –
Calibration probe is another $30,000…

Session 4: Digital Gremlins! with DP Keith Partridge (films extreme locations, etc.)
or… the many deaths of digital footage…
One way to kill a camera…–> drowning
Cameras don’t like water! Adventure cinematography can get wet…
Other ways –> dropping and freezing.
Logistics of the shoot determine choice of equipment
When one is in a remote location it’s crucial to use things one is familiar with –> if something goes wrong you can quickly fix it / find a solution

Session 5: Pixomondo and Hugo Cabaret
shot on Alexas with a 3d beamsplitter rig.
extensive metadata recorded
Nuke for compositing
VFX involved in setting up the LUTs
One pitfall of 3d: stereo artifacts
– 2-stage removal process: automatic tools followed by manual cleanup
– not all stereo artifacts are in camera; some are real-world etc. occlusions and reflections –> in both cases they are visible to one eye and not the other; creates an annoying effect and need to be dealt with.
Tools used included both rotoscoping and CGI
in this case: vfx was not involved in chosing shooting format.

Session 6: Summary
SD and tape (with the exception of HDCamSR?) are gone from post; soon from production?
Codec chaos…
Film?
In broadcast today, 1080i50 is the format — but not the format of the future.
How many pixels are enough?
Chosing a camera today is becoming as much a creative choice – much as chosing a film stock (Kodak vs. Fuji) was before
Next technological advancement on display side is autostereoscopic (no glasses) –> holoscopic interesting but still a ways off
Stereoscopic 3D is here to stay, but needs to be driven by story, not money!
Filebased –> leads to demands on coordination, integration and compatibility in order to allow effective creative sharing.
– key question is how to make the technology/infrastructure invisible so the creatives can get on with their work!
Archiving: digitise tapes or lose them. Film is still supreme on the theatrical side, but what will replace it? Very important to resolve this.
In broadcast, adminstrative and production worlds are moving closer – driven in part by consolidation of databases. How close should they get?

As an aside, this was the first time I used my iPad 2 as my primary computing device for an extended period.  The laptop stayed in the hotel room while I wrote, checked mail, etc. on the iPad with my Logitech fold-up keyboard (Norwegian link). The battery lasted all day without trouble (used about 10% per hour when in use constantly – just as advertised). 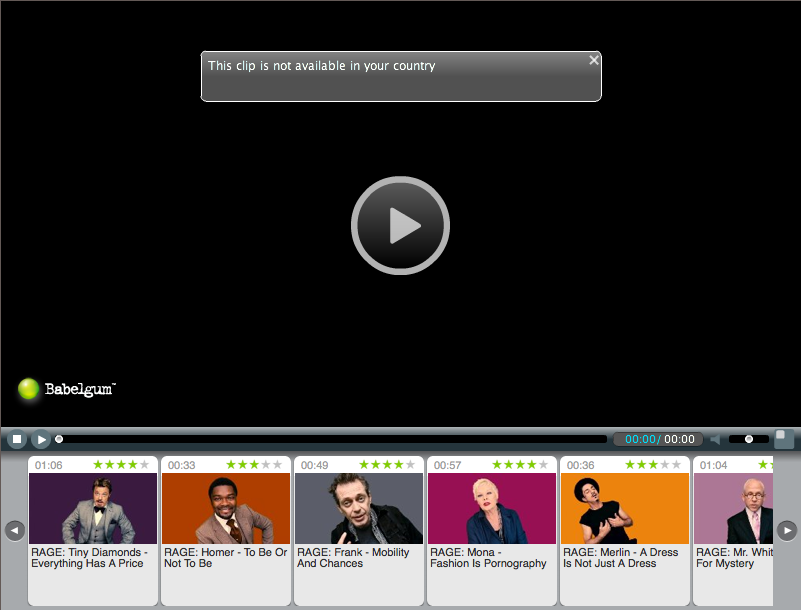