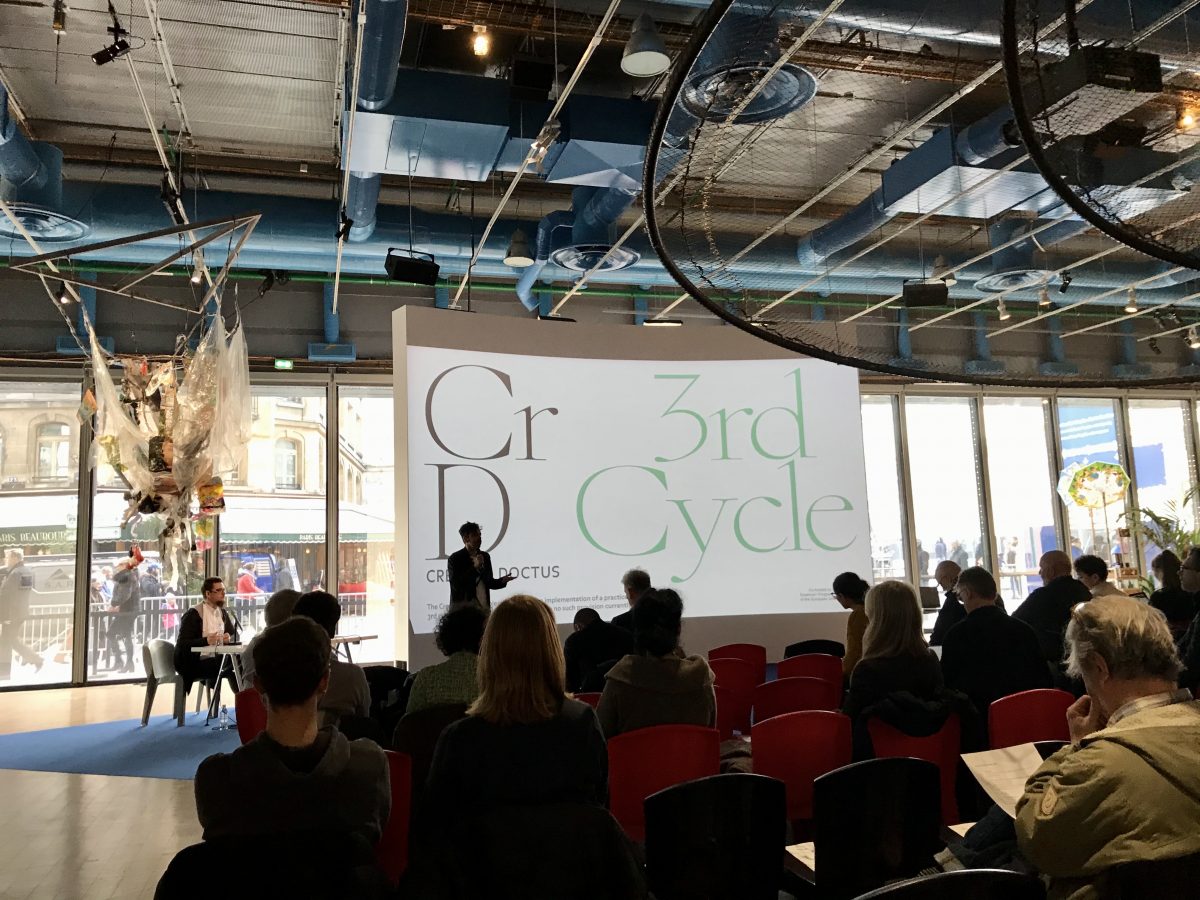 On November 29th and 30th, I attended the 2nd Creator Doctus conference, where a consortium of 7 European fine arts academies presented their ongoing work to establish a formal 3rd cycle alternative for the arts. A key element in the presentations is the focus on creating a doctoral programme where artists are allowed to be artists, and not forced to also be academics.

The programme was a mix of artist presentations, organised in collaboration with the conference venue, the Centre Pompidou in Paris, case studies from each of the 7 participants, highlighting where they are in the work of establishing 3rd cycle programmes today, and some overall presentations of the Creator Doctus initiative and their interim report.

The thing that strikes me in the most positive way, is the fact that more countries are now beginning to see the necessity of a fine arts alternative for 3rd cycle education. The «CrD» — Creator Doctus — is being touted as a defined degree which will mark that the recipient has completed a rigorous body of work in the fine arts that qualifies for a 3rd cycle degree. This avoids the problems inherent in attempting to fit the work of artists into the various PhD models that exist.

In Norway the government has established the «ph.d. i kunstnerisk utviklingsarbeid» — PhD in Artistic Research — as a defined alternative for the arts. It is a good thing in that this is clearly defined as being based on artistic output and not academic work, but the use of the designation «PhD» still has the potential to cause confusion both nationally and internationally.

To be continued. (Sometime!)

I had the good fortune to attend the seminar “Research in film schools” at La femis on April 16th and 17th. Good fortune because it was a marvellous opportunity to discuss artistic research with international colleagues and, not least, visit Paris in the springtime…

The Norwegian Film School has participated in the Norwegian Programme for Artistic Research since 2005. In that time was have seen 3 fellows – two screenwriters and one director – successfully complete their research periods and achieve the official title of Associate Professor (“førsteamanuensis”) although the programme does not presently confer a Ph.D. (or any formal Doctorate). We also currently (spring 2015) have a cinematographer in her first year of a Fellowship, and have recently submitted an application for a Fellow working with visual effects.

Artistic research is a new beast for film schools. In part, this development has come about through the Bologna process in Europe, where formal credentials have become increasingly important, even in arts schools. One can debate whether this is a benefit or not (personally, I am sceptical as the focus increasingly seems to be placed on form rather than content) but it is a fact of life for all of us who work at institutions classified as part of higher educational systems and we have to adapt to it.

The notion of “artistic research” is also very new in the film community, but in the 10+ years of participation we have seen an increasing awareness among filmmakers in Norway. This includes our teachers, who are all working filmmakers, hired at NFS on fixed-term contracts. Most work part-time and maintain an active career while teaching.

At the same time, support for artistic research can be a very liberating thing. Film can be a very commercial art form, with large amounts of money involved, and it can be difficult for artists to find the creative freedom to experiment and explore while making a living. Doing artistic research gives filmmakers the time and freedom to experiment and reflect on their own practice in a variety of different ways, even when this practice is connected to commercial projects. One example of that is the work of director Erik Poppe on his theatrical feature film “1,000 Times Good Night”.

At the Norwegian Film School (as at all the members of the Programme for Artistic Research), the key to artistic research is critical reflection. For us, this is the idea that the artists are able to clearly articulate their creative intentions in a way that can be used – both by themselves and by others – to learn from their successes and failures, and clearly show the ways in which they are expanding their own horizons as artists in addition to pushing the boundaries of their art. This is a skill we start developing at the BFA level.

Critical reflection is a requirement of the Programme for Artistic Research, although there has never been a very clear definition of it. In their guidelines, PAR describes it as:

Reflection is part of the artistic work. Material shall be submitted that communicates this
reflection, particularly in relation to:

In this description it is apparent there is no formal requirement for the critical reflection to be presented in the form of an academic paper. It has been quite important for the members of PAR to allow artists to find the best mode of presenting critical reflection themselves rather than conforming to the conventions of an alien academic culture. The rationale is quite simple: artists are trained to to their art, not to be academics, and as such they must be given the freedom to present their work and reflections in a way which makes sense within the context of their art.

This does not mean writing a paper is somehow forbidden. On the contrary, many chose to present their reflections in a written form that is quite recognisable to members of academic disciplines – but often this has more to do with convention than conviction. It is interesting to see how other media are starting to make an impact, through things like the video essay, performance, podcast, and also influenced by currents like #remixthediss.

One controversial aspect of the critical reflection is the question of “theory applied”. Different art forms have radically different approaches to theory – so different is can sometimes be challenging getting a productive discourse going between practitioners of the different arts. PAR gets around this by avoiding a definition what constitutes “theory applied”, but every new group of research fellows encounter this issue the first time they attend a meeting of all the fellows.

At the Norwegian Film School we have developed a somewhat pragmatic attitude to theory. We are not associated with an academic film theory department, and this is by conviction and choice. Theory becomes simply that which is useful to the filmmaker in the making of the film and development of the self as an artist. Reading Metz, Mulvey or Deleuze, for example, may be useful for individual filmmakers but need not be part of a filmmaker’s education. The only necessary theory is that which is useful for the artistic development of the filmmaker and the artistic project.

Or, as one of the participants at the “Research in film schools” seminar stated during one of the discussions;

It is the artist’s prerogative to abuse theory.

One of the ongoing discussions in many parts of the world is the relationship between academic research and artistic research. We are lucky enough in Norway to have a situation where artistic research is recognized as something separate yet equal to academic research by law. This formal status, which came to pass in 1995, is what has allowed artistic research to grow and flourish. Artists do not have to conform to or compete with academics when seeking support for research projects, as we have our own research council in the Programme for Artistic Research.

At the same time, the definition of artistic research has remained vague at best both in Norway and internationally. The present Norwegian definition, from 2007, can be simplified as “artistic practice combined with reflection on that practice” (it should be noted there is a working group with a mandate to, among other things, update this definition in the spring of 2015). That means, for example, that when one of our teachers works on a film project, that counts as artistic research and can be registered as such in the national research database CRIStin. This is a huge benefit for institutions where the majority of teaching staff are practicing artists, as it allows us to log research that falls within the natural activity of the milieu.

Not everyone is as lucky as we are, and many of the film- and arts schools I have encountered are subject to academic departments with a much more narrow understanding of research. Often it seems the crux of this is the traditional notion that research, for it to be valid, must produce new knowledge. In the present European environment of standardization and bureaucratization this requirement of producing knowledge has become more rigid.

This has led a number of prominent voices to proclaim, as Henk Borgdorff does in his seminal The Conflict of the Faculties, that

In sum, the knowledge embodied in art, which has been variously analysed as tacit, practical knowledge, as ‘knowing-how’, and as sensory knowledge, is cognitive, though non-conceptual; and it is rational, though non-discursive. The distinctive nature of the knowledge content has been analysed in depth in phenomenology, hermeneutics, and cognitive psychology.

(my emphasis, from Borgdoff, Henk, Conflict of the Faculties p.49)

In other words, in order to protect the status of artistic research within the academy, it has become necessary to employ the language of the academy to define artistic production as knowledge production.

Borgdorff and others have made this argument convincingly, but I find myself unsure of the ultimate success of such a strategy. For one thing, it seems like one is creating such a broad philosophical definition of knowledge that the entire concept is in danger of becoming meaningless. It also subjects artists to the language of the academy in a way that can be used to enforce critical reflection that is bound to that language; a most unfortunate circumstance.

I much prefer the use of the word understanding. Artistic research gives us an increased understanding of the nature of artistic practice and the boundaries of the art, and it does this both for the individual artist, the community of peers and the outside world.

These are initial thoughts, sure to be developed further both in my own thinking and in the ongoing collaboration with other film and arts schools. I look forward to the continuation.